Pelindo I Optimistic Kuala Tanjung Port will Operate This Year 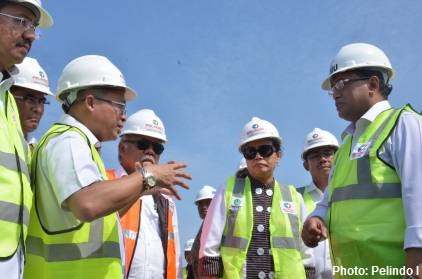 MEDAN - The management of PT Pelabuhan Indonesia I (Persero) or Pelindo 1 is optimistic that the Kuala Tanjung Port which located in Batubara Regency, North Sumatra, can be operated in the second quarter of 2018.

This is in line with the target set by the Company in realizing the government's toll road program, to make the Kuala Tanjung Port as an international hub in the western region in facilitating the logistics flow of export and import goods to Indonesia.

Transportation Minister Budi Karya Sumadi, Finance Minister Sri Mulyani Indrawati and Minister of Public Works and Housing Basuki Hadimuljono accompanied by President Director of Pelindo 1, Bambang Eka Cahyana visited Kuala Tanjung Port on Wednesday, January 17, 2018. This visit is in order to see the readiness of the multipurpose terminal which will be operated soon this year.

According to the President Director of Pelindo 1 Bambang Eka Cahyana, the current Phase I physical development progress, the multipurpose terminal of Kuala Tanjung Port has reached 96.33% (sea side) and 77.07% land side.

Basic construction works such as 500x600 m dock, 2.8 km long Trestle for four truck lanes as wide as 18,5 m equipped with 4 line x 8-inch pipe racks, as well as ground-based piling fields equipped with terminal fascia, most of which have been completed

Currently, the physical contractor is still finishing in some parts, and of course after passing the commissioning period, then the Kuala Tanjung Port is ready to serve the outflow of goods and passengers to all over Indonesia and abroad.

"Now the progress of development is almost complete, so we are optimistic that multipurpose terminal of Kuala Tanjung Port can operate on schedule in second quarter 2018. The operation of the Kuala Tanjung Port, in addition to supporting the sea toll program which launched by the government, is also our effort to uphold Indonesia's economic sovereignty in the waters of the Malacca Strait," explained Bambang Eka Cahyana, President Director of Pelindo 1 in the official press release (18/1/2018).

Total investment of this port development reaches Rp 34 trillion, but phase I is building a multipurpose terminal worth Rp 4 trillion managed by PT Prima Multi Terminal, a subsidiary of a number of State Owned Enterprise (SOEs/BUMN), which consists of Pelindo 1, PT Pembangunan Perumahan, and PT Waskita Karya.