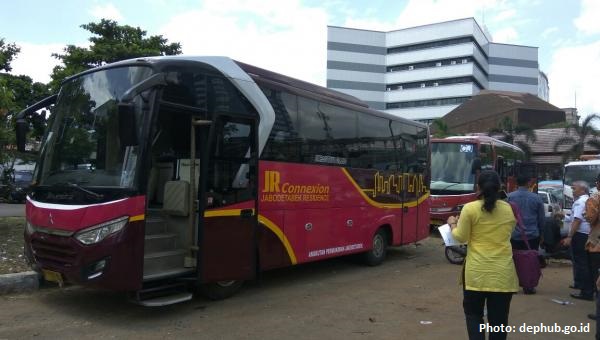 The launch of bus infrastructure to parse traffic congestion was conducted on Tuesday (14/02/2017). The bus fleet will be a transit settlement for residents who live in the area of Bekasi, Depok, Bogor and Tangerang to Jakarta. This access would be an alternative for people so they want to switch from personal vehicles to public transport modes.

"BPTJ does research, where the public expect their convenient public transportation directly to the destination," said Transportation Minister Budi Karya Sumadi, as reported from dephub.go.id (02/16/2017).

Budi Karya Sumadi explains in more detail that during this time 'share' of public transport and private vehicles is only 14 percent. The Ministry of Transport through BPTJ targeting the public desire to ride on public transport could be higher, and this 'share' could reach 40 percent in 2019. By doing so, the numbers of congestion would be much reduced.

Separately, the Head of the Board of Jabodetabek Transportation Management (BPTJ) Adriani Elly Sinaga said, "Through BPTJ survey with five percent respondents, the average of Jabodetabek shows people prevention who want to move to a premium freight as much as 76 percent. That means positive".

Elly said the enthusiasm of people to switch to public transport is quite high as long as adequate and comfortable means of transportation. It is indeed a service priority for JR Connexion Bus. That's why the bus interior does look very exclusive.

Plus, the capacity of passengers in the bus said Elly, just to accommodate 100 percent of the available seats. The bench configuration for two passengers with one row of 11 lines, and six seats in the rearmost row is observed quite extensive and there is no 'handle' for standing passengers.

"Not to mention, the tariff is relatively affordable at Rp 20-25 thousand per person," added Elly.

Another point of BPTJ concern is the JR Connexion Bus Schedule start from departure and its return attempt to always on time. Therefore, the residents of the housing would want a public transport mode that can provide certainty of travel time.

JR Connexion Bus will depart from the settlement as Grandwisata (Bekasi), Bintaro Jaya (Bintaro), Bumi Serpong Damai (Serpong), Zam-zam Park (Bogor) and Kota Wisata (Cibubur). This bus will only stop in the downtown of Jakarta. For example, in FX Senayan, Blok M, and the Sudirman district. It will be available 17 fleets of JR Connexion bus for an initial operation which is ready to serve the community.

Urban Observer Yayat Supriyatna said that the embodiment of JR Connexion Bus deserves appreciation. With inexpensive tariff system yet provide optimal services, it would be the user's choice for public transport services and it impacted the traffic by unravelling the congestion on the highway.

"The condition will get better when ERP (Electronic Road Pricing) is implemented around the main line of Jakarta," he said.