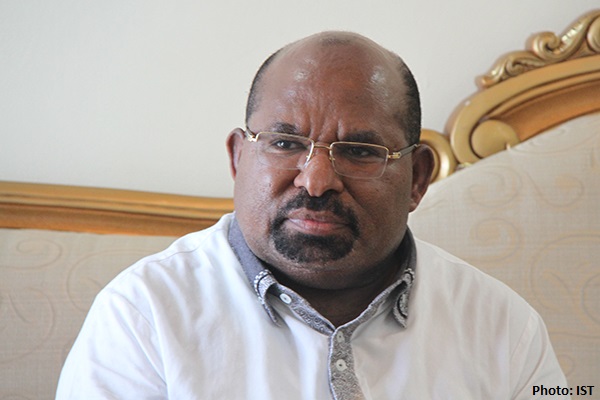 JAKARTA – Papua Governor Lukas Enembe visited the Presidential Palace in Jakarta for a meeting with President Joko Widodo (Jokowi) and several Ministers in the Cabinet. This meeting discussed the evaluation of national strategic projects in Papua.

“We discussed the strategic development in Papua. The main point is we convey the implementation of the development that has been done in accordance with the Presidential Decree. Firstly, concerning the revitalization of the airports, one of them is in Jayapura which has been completed in order to become an international airport. The issue in border is also finished, electricity issue, telecommunication, Merauke Special Economic Zone,” said Lukas Enembe as reported from metrotvnews.com (19/7/2017).

According to Enembe, there are several other things discussed in this meeting. One of them is the preparation of the National Sports Week (PON) which will be held in Papua in 2020.

“Most of the discussions related with PON. In the near future, the President will issue the PON Inpres in Papua. We already convey the cost required, the local government has allocated 2 Trillion IDR, we ask for 1.6 Trillion IDR, fulfilled by central government for 2018. It has been approved and Ministry of Public Works will working on it.” he explain.

Airport development is also a major concern of the government, the extension of runway is one of them. Hopefully, Papua’s economy will be able to grow up from this massive development.

Minister of Transportation Budi Karya explains “So, in this 2 years, we already reclaimed 5 hectares in Sorong city, we still thinking about Seget, it is either Seget or other places. If Manokwari airport needs to be extended, we have to to complete its land issue. The construction will start in the next year if the land issue completed.”