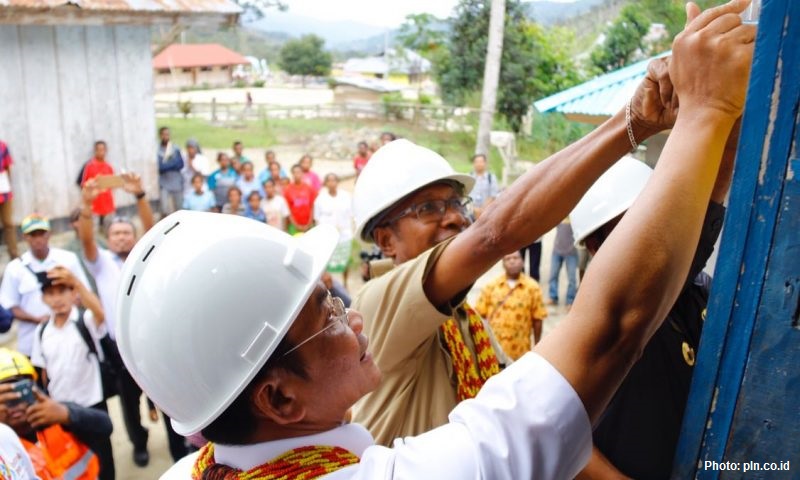 "Today simultaneously 101 scattered villages are enjoying PLN's electricity. This is a very special gift for people of Papua and West Papua who have not enjoyed electricity for decades," said Regional Director of PLN Maluku and Papua Ahmad Rofik in the press release, when inaugurating village electricity in Neney district, South Manokwari, West Papua, Wednesday (25/10/17).

Ahmad Rofik added, "Up to now there are already 117 villages that have been electrified from the target of 379 villages for this year, we are trying to make the rest of the villages that not yet completed will also be completed (to gain electricity) by the end of this year."

"There are villages whose systems are isolated by installing diesel generators, such as in Neney district, but many of them use a grid system (extension) from existing electricity," Rofik explained.

"It is not easy to realize the target, many obstacles experienced by field officers in distributing electricity to the village, one such as geographical conditions and difficult terrain that complicate the mobilization," he said.

Through the program of Papua Terang 2020, PLN builds power plants and power grids to remote villages that have not yet been electrified.

In the same place, South Manokwari Regent Markus Waran states with the presence of PLN electricity in the region has made night turns into daylight. "Children can now study at night, and there are families that can improve the economy by working at night," says Markus.

Markus admitted that the success of distributing electricity to parts of South Manokwari is the result of harmonious cooperation between local government and PLN, especially in the land provision of machinery placement and the planting of electricity poles.

"We have confirmed to the community here if you want electricity to exist smoothly, so there must be no more efforts to prevent PLN installation. The trees should no longer be near the power pole," said Markus.