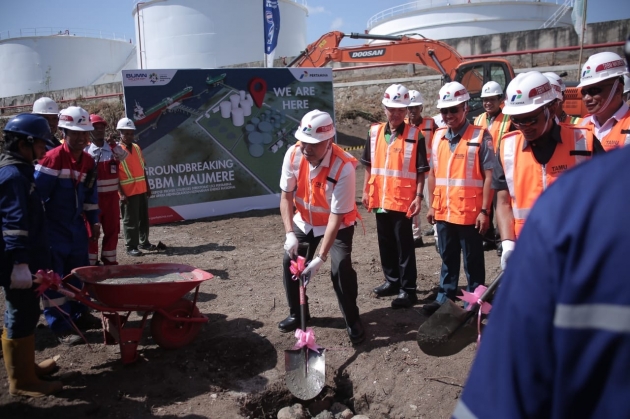 Adiatma Sardjito, Vice President Corporate Communication Pertamina said that the company allocates more than Rp36 trillion. Rp20 trillion from it is being focused on strategic projects especially in East Indonesia.

“Those various kinds of strategic projects were built to strengthen the BBM and LPG distribution especially in East Indonesia, along with to support the government’s programs such as One Price Fuel (BBM Satu Harga) and Petroleum to LPG conversion program,” said Adiatma after an event, Monday, as reported by detik.com (7/30).

As for petroleum terminal development, there are 12 projects prepared with value Rp10 trillion to support petroleum to LPG conversion program across Indonesia. This project development is aimed to create an efficient supply system by eliminating Floating Storage and Offloading (FSO) which all this time has been used as a temporary shelter.

Meanwhile, to improve the reliability of operations and inter-island connectivity, to be in-lined with the development of new airports, Pertamina is building 3 DPPUs along with other supporting facilities worth Rp3,4 trillion. Then, to improve the reliability of the supply through the sea, Pertamina is currently executing four repair and development of port slope facilities projects worth Rp1.6 trillion.

These projects, continued Adiatma, most of them are already running, and has entered the construction phase. While the rest are still on the preparation stage.

"Especially in 2018, based on RKAP which has been approved by the Ministry of SOEs as shareholders, has provided a budget of Rp6 trillion or equivalent to USD 462 million," said Adiatma.

In order to support the investment, the project financing is done by Pertamina and its subsidiaries. As for the contractor, Pertamina is in synergy with BUMN Karya such as Wijaya Karya, Barata Indonesia, Hutama Karya, and Rekayasa Industri (Rekin).

"With the synergy, the construction of various projects is expected to finish faster, as well as not burdening the company's cash flow," said Adiatma.