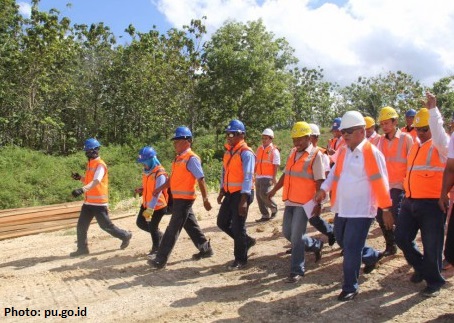 Minister Basuki reviewed this project on Sunday (30/4/2017). On the occasion he explained that the GORR project has been started since 2014, even President Jokowi in 2015 had ordered to accelerate this construction project.

Minister Basuki explained that the project is divided into 3 segments. For segments 1 and 2 can be completed this year, and connect with regency roads. The construction of segments 1 and 2 still face several obstacles, especially land acquisition. There are 2 locations that have not been released yet, one because of community land and another is HTI (Industrial Plantation Forest).

"The permit for HTI utilisation is the authority of the Governor, while the community land because it is a brick-making site, the residents want not only compensation for the land area but also the volume," he said.

Meanwhile, for segment 3 will begin land acquisition in 2018 with a budget of 470 billion, so all of the GORR can be connected and can be used in 2019. From along the GORR road, there are 2 bridge projects, namely the Construction Packages of GORR I-I Bridge along 212 meters worth Rp 62,45 billion with PT. Brantas Abipraya (Persero) as the contractor. While the GORR I-2 bridge along the 253 meters worth Rp 63,87 billion is conducted PT. Dwi Pongo Seto as the contractor.