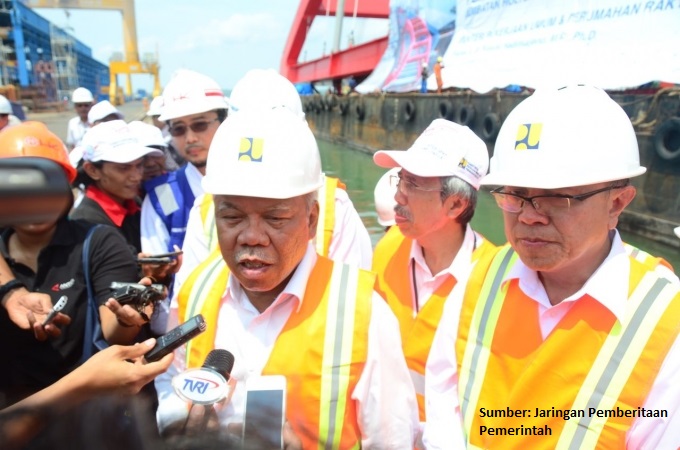 Jakarta - The Public Works and Housing (PUPR) Ministry confirmed it will continue infrastructure development outlined in the list of national strategic projects (PSN), and the targeted 26 PSNs will be completed by the end of 2018.

PUPR Minister Basuki Hadimuljono noted in the ministry`s release in Jakarta on Thursday that there were five infrastructure categories: energy, transportation, water resources, telecommunications, and settlements, as reported by antaranews.com.

"Of the five infrastructure categories above, three are within the scope of the responsibility of the Ministry of PUPR, which are transportation in the form of roads and bridges; water resources, such as dams, irrigation, raw water; and third, water, residential infrastructure, such as for drinking water, sanitation, and solid waste," he explained.

According to Hadimuljono, the availability of infrastructure was necessary to boost national competitiveness and to also ensure equitable distribution of development results across various regions.

According to President Regulation (Perpres) No. 56 of 2018, which is the second amendment to Perpres No. 3 of 2015 on the Acceleration of PSN Implementation, there are 137 infrastructure projects in the PUPR sector from 227 PSN, which comprise 51 dam projects, six irrigation projects, one sea embankment project, 64 toll road projects, four national road projects, seven drinking water and sanitation projects, and three housing projects.

"We are focused on completing infrastructure projects. There are no new development activities in 2019 that use multiyear budgets except for dam construction and irrigation. We hope no projects would be stalled in the middle of the road, including PSN. All of them continue according to plan and can be completed after 2019, " Minister Hadimuljono explained.