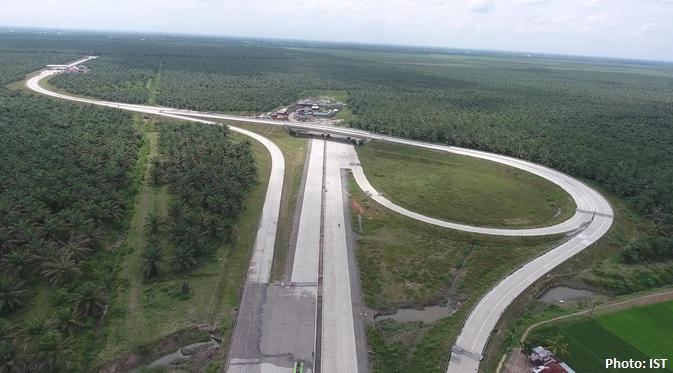 PEKANBARU – President of Indonesia Joko Widodo (Jokowi) accompanied by Minister of Public Works and Public Housing (PUPR) Basuki Hadimuljono and Minister of SOE Rini Soemarno reviewed the physical progress of Section 1 of Pekanbaru-Dumai toll road on Sunday (23/7/2017). The toll road section that part of the Trans Sumatra Toll is targeted to be finished at the time of next year’s Lebaran.

Minister of PUPR Basuki Hadimuljono said that the toll road project has reached 47% of land acquisition. “We already got a legal opinion from prosecutor regarding which one is able to be replaced and which one is unable. For the Section I Pekanbaru-Minas along 9,5 km is targeted to be paved by the end of 2017,” said Basuki on Sunday (23/7/2017) as reported from kontan.co.id.

This toll road will integrate the connectivity of the region, facilitating the flow of goods distribution from industrial centre to various regions in Sumatra. More importantly, Pekanbaru-Dumai toll road can improve and facilitate the access of Pekanbaru as the Capital of Riau Province as well as business city and Dumai as a port city with advanced petroleum industry and agribusiness.