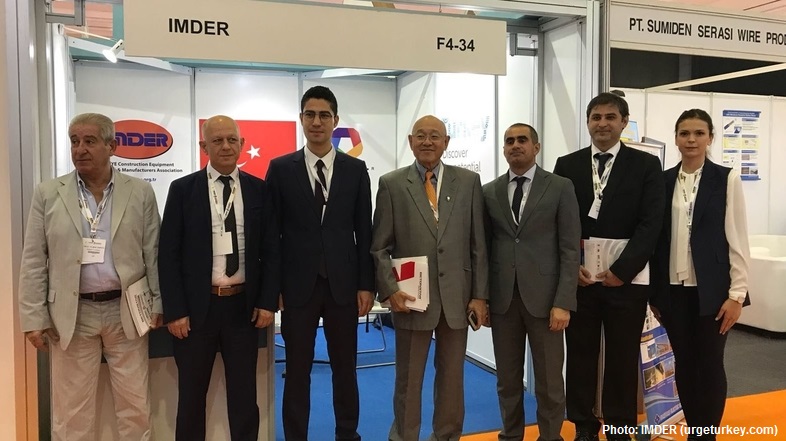 Construction Equipment and Materials Handling Cluster Project that İMDER & İSDER run together with the support of the Ministry of Economy of Turkey, ended successfully at the and of 2017.

İMDER & İSDER organized a meeting on 21 February 2018 in order to inform the new members of the second Cluster Project about the opportunities that the new project will provide.

İMDER & İSDER completed the first cluster project succesfully at the end of the 2017 which started in 2014 in order to expand the exporting markets of its manufacturer companies and to help them to be more competitive in international arena.

With the support of the members that are satisfied with the first cluster project, İMDER & İSDER started to work right away for the second Construction Equipment and Materials Handling Cluster Project.

The meeting started with the speech of the İMDER Board Member, Ediz Calapoğlu. Calapoğlu stated that the main aim of the new project is to increase the efficiency with the participation of the new manufacturer companies, in addition to the former cluster project members.

The President of the Cluster Project Committee- Mehmet BEBEK said that they will take along powerful manufacturer companies of the sector in the second project and they will follow a more efficient work plan with the previous project experiences.

Chairman of the Konya Chamber of Commerce and a member of İMDER, General Manager of Hidrokon while emphasizing the importance of the national production, in the meanwhile stated that the fully independent domestic production is possible only thorugh a sustainable work strategy.

Chairman of İMDER- Merih ÖZGEN underlined that the cluster project not only enlarges the export markets of the companies but also gives a corporate structure to the companies with its studies on branding.

Sales Director of MECALAC, Erdal EROĞLU while stressing the advantages of the cluster project from the training and counseling to the foreing marketing programs in his speech, also underlined the importance of the project for the manufacturer companies that are seeking for the new export markets.

Güralp Vinç which is one of the most satisfied member of the first cluster project and made a dealership agreement with a local company in South Africa which will effect both Turkish and machinery industry, has also participated the meeting and shared his experiences.

Export Sales Manager of Güralp Vinç Yunus HACIHALİL said that they believe that the companies which want to expand its sphere of influence must take a part in this project.

The Second Cluster Project of İMDER & İSDER which will be more powerful with its new members aims to help them to become more competitive in international arena and to reach their export targets with right strategies, to find new markets for their products which has been manufactured using advanced technology.