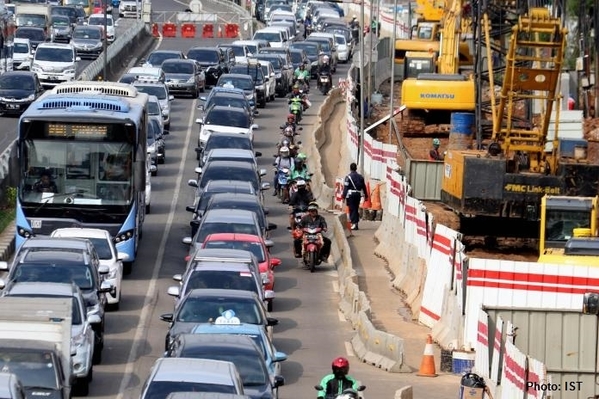 JAKARTA - Intelligent Transport System (ITS) Indonesia estimates, if not resolved then the economic losses due to congestion in Jakarta will reach USD6, 5 billion or equivalent Rp87, 8 trillion in 2020 (exchange rate USD 1 = Rp13.508). The value increased 6,5 times compared to the loss of the impact of traffic jams in the capital in 2010 and worth USD1 billion (Rp13,5 trillion).

Noni Purnomo, the President of ITS Indonesia revealed, the average speed of vehicles in Jakarta when busy is now only 10 km per hour. The rate has declined every year since 10 years ago. "The city of Jakarta is predicted to experience total congestion by 2022 if there are no comprehensive steps in managing urban transportation ecosystems," said Noni, as reported from Sindonews.com (27/11/2017).

Noni acknowledged that the Government has been done various efforts to handle transportation problems and the business actors. But in her view, the solutions presented are still ad hoc and sporadic, so they still can not answer the overall challenge.

In October, Bappenas also revealed losses due to congestion of Rp67 trillion per year. Jakarta Provincial Government identifies bottlenecks triggered by a number of issues such as infrastructure development and the increasing number of private vehicles that are not proportional to the number of roads, as well as there is no integration between intermodal mass transportation with the supporting facilities.

Vice Chairman of the Indonesian Truck Entrepreneurs Association of Distribution and Logistics Kyat Maja Lookman said the congestion that occurred indeed contributed greatly to the operational. The problem resulted in lower vehicle utilization or only an average of 50,000 kilometres per year.

"Therefore, the solution must exist, indeed we recognize that infrastructure is one of them, more specifically the addition of toll roads in Indonesia," he said.

He added, in addition to toll roads, toll automation system through the implementation of electronic cards also suppresses the number of congestion. However, the pressure is still only in the segments that are not crowded.