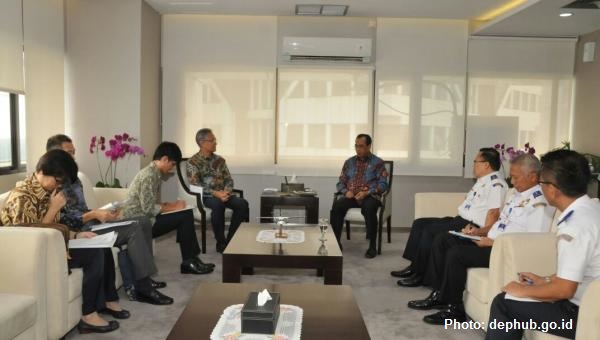 JAKARTA - Transportation Minister of the Republic of Indonesia Budi Karya Sumadi met with Japanese Ambassador Masafumi Ishii to discuss 4 (four) points related to bilateral transport infrastructure cooperation between Indonesia and Japan. The meeting on Monday (14/8) is an advanced step that discusses the cooperation of infrastructure development and financing in the country.

The four points of the meeting are the development plans for the railway development of Jakarta-Surabaya, the continuation of the Indonesia-JICA cooperation agreement for the MRT East-West Corridor study, the extension of the disbursement loan of the Cikarang-Manggarai double-double track railway project and development cooperation Port of Patimban.

Transportation Minister delivers expectation related to the acceleration plan of the travel time of railway route of Jakarta-Surabaya route to approximately 5 hours, where the Government of Indonesia has intensively discussed preparation to make it happen. Menhub also affirmed that Kemenhub is committed to continuing the cooperation agreement between the Indonesian Government and JICA (Japan International Cooperation Agency) for the study of the East-West Corridor MRT project.

"After the Independence Day celebration, I have assigned the Director General of Railways to meet with Mr. Ambassador to discuss details of the follow-up of the GoI's plan to continue the commitment of implementing the Loan Agreement for Study Cooperation The East-West Corridor MRT construction plan in accordance with the agreements agreed between the Government of Indonesia and JICA ," said Budi Karya Sumadi as reported from dephub.go.id (15/08/2017).

Budi Karya Sumai will also ask the Director General of Railways to discuss with Japanese Ambassador Masafumi Ishii staff related to the extension of disbursement (payment) from September 2017 to early next year for the construction of double track Cikarang-Manggarai railway track.

"We are requesting this extension because there is a technical process with BPKP which still requires time. We expect the possibility will exceed the time limit of disbursement loan agreement in September 2017, "added the Budi Karya Sumadi.

Related to the port Patimban development plan, Transportation Minister said the Government of Indonesia continues to implement the work plan in accordance with the agreed schedule.