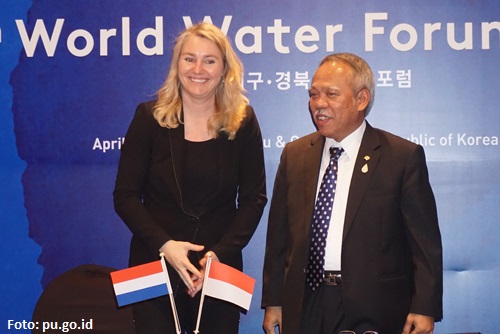 JAKARTA - Minister of Infrastructure and Environment of the Netherlands Melanie Schultz van Haegen led the Dutch delegation in the meeting with the Minister of Public Works and Public Housing (PUPR) of the Republic of Indonesia, Basuki Hadimuljono at the Ministry PUPR, Last Monday (21/11/2016).

Both countries discussed a number of cooperation that has existed since 2001, particularly in the field of water resources. Reported from pu.go.id, Minister van Haegen expressed his appreciation for the active participation of Indonesia in the international community in the field of water resources by saying "We are all facing similar problems (related to water) and needs to address the same issues."

Indonesian-Netherlands cooperation in the field of Water Resources has entered the fourth phase with the period 2015-2019. The first phase took place in 2001-2006, the second in 2007-2012, and the third in 2012-2015. In the fourth phase, there are some activities that are coordinated through a working group, among others are regarding integrated water resources management, water for food and ecosystems, as well as the availability of water and sanitation.

One of the priority activities were discussed at the meeting were National Capital Integrated Coastal Management (NCICD) which intended for the protection of coastal areas of Jakarta, sanitation and water supply, improvement of connectivity, community sustainable urban and regional development.