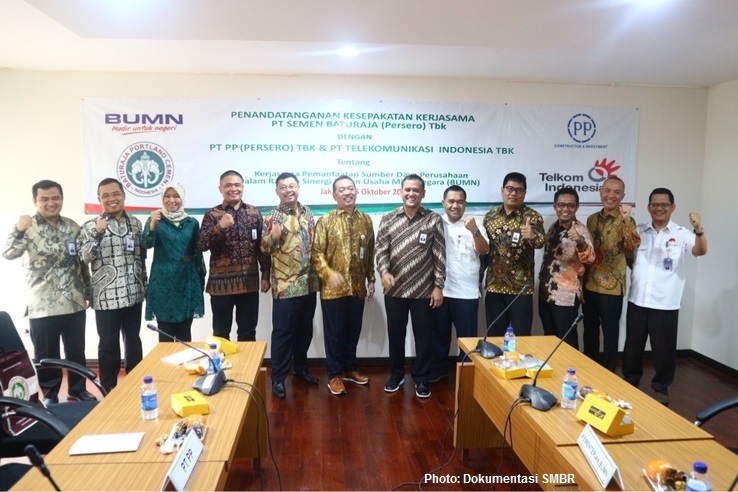 JAKARTA - PT Semen Baturaja (Persero) Tbk is establishing a synergy with PT PP (Persero) Tbk and PT Telekomunikasi Indonesia Tbk through the signing of a memorandum of understanding on cooperation in the office of the Ministry of State-Owned Enterprises (BUMN) on Wednesday (25/10).

President Director of PT SMBR, Rahmad Pribadi, said that his party is cooperating with PT PP to build SMBR employee housing near the factory site located in Baturaja, South Sumatera, but the synergies according to Rahmad will not stop only on housing construction projects.

Rahmad emphasized that the company that he leads are also ready to supply cement for the needs of infrastructure development projects which undertaken by PT PP. "Especially projects that are in the area of SMBR distribution such as in Palembang, Bengkulu and Lampung," he said in a press release (26/10).

Rahmad said that PT SMBR will use Telecommunication, Information, Media, Edutainment and Services (TIMES) services which are managed, developed and provided by Telkom. Cooperation between two SOEs under the Deputy Minister of Mining, Strategic Industries and Media Ministry of SOEs that implementation is done on a scheduled basis with a span of time for five years (multi-year).

Through this synergies, Rahmad said all of Semen Baturaja business units will be connected with communication data and video conference infrastructure.

"So that the application programs that have been made can be applied and the data on line consolidation can also be done," he concluded.