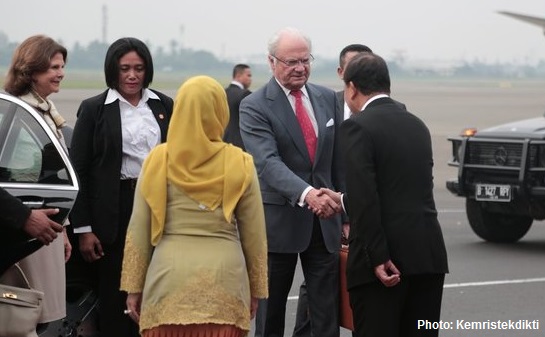 BOGOR - The Government of Indonesia on this day received the visit of the Swedish King Carl XVI Gustaf and Queen Silvia. The visit discussed bilateral cooperation between the two countries, where infrastructure projects are included in the important matters discussed.

As reported by Wartaekonomi.co.id (22/5/2017), President Joko Widodo (Jokowi) and First Lady Iriana Joko Widodo received the visit of King Carl XVI Gustaf and Ratu Silvia at Bogor Palace. On the occasion, the President and First Lady accompany the King and the Queen of Sweden to saw a replica of the statue of "The Hand of God" made by Swedish sculptor Carl Milles as a gift from the Swedish government to the Indonesian government in 1957.

On the second day, King Carl and Queen Silvia will participate in the Hackhaton event to help improve the Jakarta traffic situation and the inauguration of the Indonesia-Sweden Executive Business Forum (ISEF) that focuses on digitalization, infrastructure and quality of life and followed by a visit to the vessel traffic center In Indonesia Port Cooperation (IPC) Tanjung Priok.

On the third day, King Carl and Queen Silvia leave for Bandung by train and meet with Mayor of Bandung Ridwan Kamil, visiting the Museum of Asia-Africa and Persib Bandung. The delegation also witnessed the signing of the MoU portal Linkedin Sweden-Indonesia Connect to connecting alumnae with Swedish Indonesia company as well as attending triple helix model seminar at ITB.