BNI Crowned as Bank with The Best International Division in ASEAN 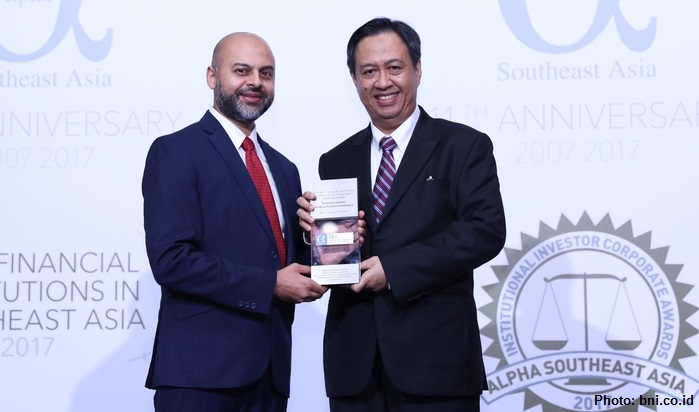 Hence, Alpha Southeast Asia magazine as the conductor of the survey which leads to BNI assessment submitted the Best International Division in South East Asia award plaque to the Director of Treasury & International BNI Panji Irawan in Singapore (14/9/2017).

Some of the best services provided by BNI to support the needs of businessmen in international transactions include Remittance, Trustee, Custody, Trade Finance, Overseas Branch Offices and B2B Financing Network. The seven types of services are the business units with the largest contribution to services to customers in the International Division of BNI.

Every product that BNI prepares to serve its customers on these international transactions is sustained by the support of its largest branch network owned by national banks from Indonesia. Currently, BNI has offices in Singapore, Hong Kong, Tokyo - Japan, Osaka - Japan, Seoul - South Korea, New York - United States, London - United Kingdom, and Yangon - Myanmar."International business BNI contributes to the formation of corporate profits. The pre-tax profit earned from the various services we provide on international transactions reaches more than Rp 1,2 trillion, exceeding the target," said Panji Irawan on the press release on bni.go.id (19/9).

BNI recorded a prominent achievement compared to other banks in Indonesia and even in Southeast Asia to get the Best International Division in South East Asia. This best achievement was obtained for the fourth time in a row since 2014.

"Looking at the trend, BNI continues to improve and update its service products, not only in the Trade Finance business, but also other related transactions, such as Cash Management services. In this case, BNI's Cash Management is integrated with Digital Banking and Corporate Credit platforms to attract more customers and develop markets that will ultimately increase revenue and product utilization rates," conclude Panji.