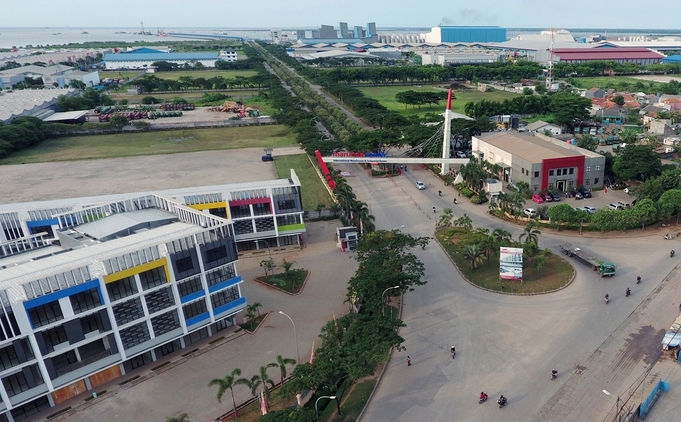 JAKARTA - Industrial and Warehousing Area Marunda Center started operating since 2005, currently covers an area of + 600 hectares located in Tarumajaya Bekasi. The strategic location of Marunda Center, relatively close to the centre of Jakarta and just less than 10 km from Tanjung Priok Port makes it easy for companies that need access to the port or the city centre.

Currently, from 600 Ha of available land, 300 Ha has been built with basic infrastructures such as roads and drainage and equipped with electricity, clean water and sewage treatment facilities, Pertagas and PGN gas pipelines are available to tenants in need. Currently Marunda Center has been home to over 300 companies with various business fields including logistics, manufacturing, trucking, e-commerce etc.

Some big companies both local and international which have been located within Marunda Region include PT. SMART, Tbk, the producer of FILMA cooking oil, SHELL lubricant oil manufacturer, which is the biggest lubricant factory in Indonesia operated by the international company. In addition, some logistics companies such as DB Schenker, CJ Korea Logistics and e-commerce company JD.ID chose warehouse facilities at Marunda Center as Distribution Center to serve JABODETABEK area.

The construction of the 300m stage 1A pier has been completed and operated since August 2014 with a draft of 6,5m to serve vessels weighing up to 10,000 DWT. This marine terminal is developed in phase 1B by adding pier along of 500 m and the depth became 9,5 m so it can serve vessels weighing up to 40,000 DWT, which the construction has been completed in July 2017 and has begun to operate and has gained status as a General Terminal with the signing of a 65-year concession agreement with the government.

The construction of a marine terminal facility within the area is an area developer's effort to improve facilities and services to tenants within the Marunda Center area and also in line with government policies that prioritize infrastructure development including the construction of a marine terminal to support the smooth flow of goods so it is expected to reduce logistics costs.

With this marine terminal facility makes Marunda Center as one of the few industrial areas integrated with the sea terminal in Indonesia and re-positioning itself from a traditional Industrial area that only builds and sells industrial land into Integrated Industrial Estate, Port and Logistics Center that provides infrastructure, products and services related to Industry, ports and logistics in an integrated area.