Jokowi Encourages The Completion of Infrastructure Projects in Jakarta 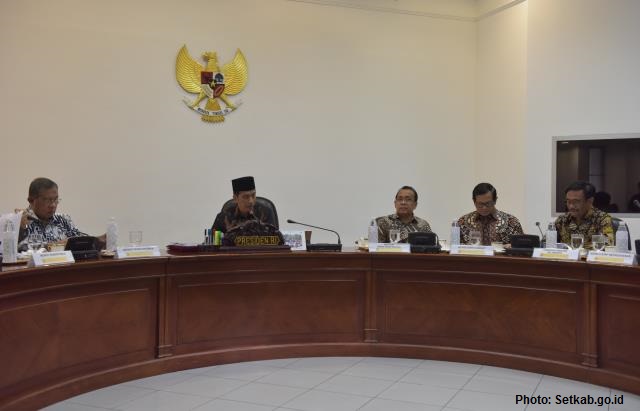 JAKARTA - President of the Republic of Indonesia Joko Widodo (Jokowi) requested that various ongoing mass transportation infrastructure projects could be completed, either by the present DKI Jakarta Provincial Government and the new era based on general election for the regional head which conducted in last April.

This was conveyed by President Jokowi in a Limited Meeting on the Evaluation of the Implementation of National Strategic Project and Priority Program in DKI Jakarta Province, at the Presidential Office,

Jakarta as a metropolitan city is indeed in a phase of infrastructure development, with various mass transportation infrastructure projects such as Light Rapid Transit, Mass Rapid Transit, Railway, and Toll Road Development for smooth access to the port of Tanjung Priok. President Jokowi also highlighted various major issues in Jakarta which he said should be handled together.

The main problems faced by DKI Jakarta as well as the metropolitan cities of the world, according to the President Jokowi are the problems of urbanization, poverty, social inequality, public facilities, electricity, housing, clean water, sanitation, congestion and provision of mass transportation, waste management, air pollution, and spatial control.

President Jokowi reminded that in solving this big problem can not only be done by the government of DKI Jakarta. "But need the help and involvement of central government, require cooperation, cohesion with buffer areas in the capital," said President Jokowi as reported from setkab.go.id (12/7/2017).

He explained that the Jakarta economy grew 6,48 percent in the first quarter of 2017, higher than the national economic growth at the level of 5,01 percent. While for the open unemployment rate in February 2017 was recorded 5,36 percent or down 0,41 points compared to 2016. Therefore, he hopes that the achievement will be enhanced by continuing to encourage economic growth so that it can open new jobs and be able to absorb more manpower.