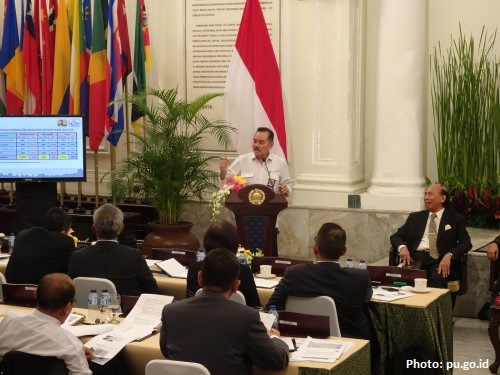 JAKARTA - The Ministry of Public Works and Housing provide a solution to increase investment interest in the infrastructure development acceleration which now becomes the focus of the Government of the Republic Indonesia. The solution is to establish a pattern cooperation schemes between the Government and Enterprises (KPBU).

This was conveyed by the Director General of Construction KEMENPUPR, Yusid Toyib who also explained that the economic infrastructure in Indonesia is in need of cooperation in the form of investment. This is because the amount of infrastructure funding which allocated by the government is currently insufficient. It needs foreign investor involvement in order to fulfil financial Infrastructure Development.

We need to raise the Indonesian construction market evenly across foreign countries. Indonesia Contractors is great based on what they have generated, "said Director General of Construction Yusid Toyib as reported from pu.go.id (01/19/2017).

KPBU knot at the Ministry PUPR enabled to bridge the entire provision of existing infrastructure, thus, since there is the government control. "The presence of KPBU knot in the the PUPR Ministry can reduce the transaction cost of economic of the KPBU project, as well as build trust in foreign investors in doing KPBU scheme on PUPR infrastructure projects," added Yusid.