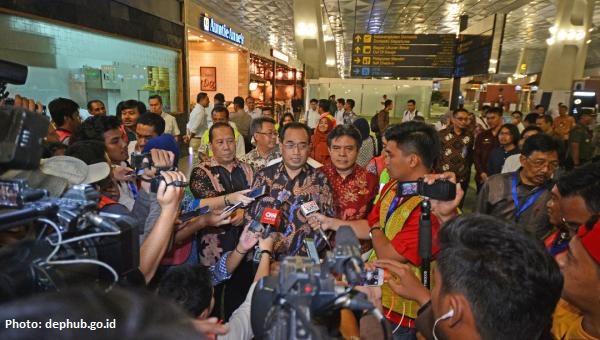 JAKARTA - Airport is one of the most important infrastructures that supports connectivity aspect. Therefore Transportation Minister of the Republic of Indonesia Budi Karya Sumadi appreciated the successful development of Terminal 3 of Soekarno-Hatta (Soetta) International Airport, as well as the smooth operation of Garuda Indonesia international flight route.

Garuda Indonesia international flight route officially moved to Terminal 3 Ultimate of Soekarno-Hatta Airport. On the occasion, Minister of Transportation arrived at Terminal 3 of Soekarno-Hatta Airport through GA-835 Singapore-Jakarta flight which landed at 18.30. He checks the service by following the arrival flow procedure as passengers, start by check immigration until the goods check on customs.

"I congratulate Garuda Indonesia and Angkasa Pura II who have successfully conducted the operation of Terminal 3 smoothly," said Budi Karya Sumadi as reported from dephub.go.id (3/5/2017).

After the operation of Garuda Indonesia international flight route at Terminal 3 of Soekarno-Hatta Airport in early May, Angkasa Pura (AP) II will also move the flights of eight skyline airlines from Terminal 2 to Terminal 3 in June and the remaining 25 other airlines will move at the latest in early August.

"All international airlines have moved to Terminal 3 in late July or early August, so Terminal 3 is ready to operate with a capacity of 25 million traffic passenger/year," explained AP II Director Muhammad Awaluddin.