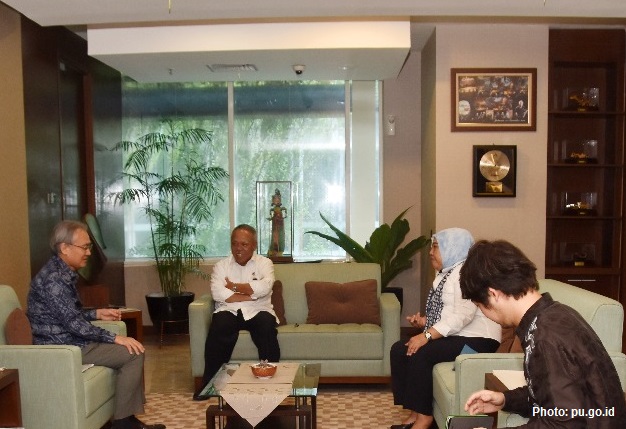 JAKARTA - The new Japanese Ambassador to Indonesia Masafumi ISHII came to the office of the Ministry of Public Works and Public Housing (PUPR) and was received directly by Minister Basuki Hadimuljono. His arrival on Tuesday (30/5) is to discuss the development of cooperation in the field of infrastructure, namely, access road port Patimban.

The first cooperation discussed was the assistance of the security system for the Bung Karno Main Stadium. Cooperation of Grant from Government of Japan with Non-Project Type Grant Aid (NPGA) scheme has value JPY 500 or equivalent Rp 59,5 billion.

The second cooperation discussed is the continuation of the construction of the Patimban Port access road. The port is planned to be operated gradually, beginning with a soft opening in March 2019 and fully operational by 2027. The access road has a length of 8,1 km with 4 lanes and 2 directions with a construction value of Rp 1,12 trillion.

"The Ministry of PUPR is assigned to prepare for access to Patimban from the Cipali Toll. In the first quarter of 2019 targeted can already operate," said Minister Basuki as reported from pu.go.id (31/5/2017).

The third project discussed is the Jakarta Sewerage System in the form of construction of wastewater treatment plant (IPAL) from Japanese Government Loans that will be built on zone 1 and zone 6 into two priority locations from 15 Zones (Zone 0-14). The project is expected to begin in 2018 and completed by 2022.

-The fourth is Bandung Intra Urban Toll Road (BIUTR) which is a toll road project in Bandung, which is divided into 4 packages: Pasteur - Pasupati (1.5 km), Soekarno Hatta - Gedebage (2 km), Kopo-Leuwipanjang (1 , 3 km) and Kiara Condong - Buah Batu (1.3 km). Currently, the preparation of MoU between the Government of Bandung, West Java Provincial Government and PUPR Ministry is related to land acquisition.